5 Things We Can Learn from the Animals

There are some fundamental principals in martial arts that anyone can benefit from, without having any technical skills or official training. These principals relate to animal behavior.

My first years in martial arts training were devoted to mastering the basic techniques of self-defense. Somewhere along the way, the idea of the warrior spirit surfaced and I began to see that every aspect of my life was being affected by my training.

Anyone may adopt and embody the warrior spirit—it is a way of life, living, acting, and being. All animals have a warrior spirit. We can learn from certain key animal behaviors to empower our lives.

There are many different animal martial arts styles—crane, monkey, tiger, snake, and more—in which the particular animal’s movements and characteristics are mimicked. This article will address the more generalized animal behaviors that teach us survival skills and the power of presence.

Use Energy to Your Advantage

All animals conserve energy as a matter of survival. Instinct informs them to save their reactions, strength, endurance, adrenaline, and intense focus for fight-or-flight, for stressful environmental conditions, for births, for times of food scarcity, and so on.

Humans, on the other hand, waste energy both consciously and unconsciously on a continual basis. Almost everyone complains of being tired, sometimes every day. This may be in part due to poor diet, too much sugar, too much caffeine, and too little nutrition.

But there is a more insidious drain on energy—mental and emotional stress. In today’s world, expectations are high to achieve in every aspect of life. Pop culture and social media are permeated with melodrama. The world is fast-moving and full of pressures. This creates a situation whereby the body is perpetually in fight-or-flight from background stress and unmitigated excitation, using up vital resources resulting in depleted energy and eventually, chronic fatigue.

Learn from the animals and don’t expend energy where it isn’t needed. Begin to cut energy drains where possible. For example, animals don’t get offended. Animals accept whatever circumstances they find themselves in, and act only in a proactive way—not complaining or trying to change what is. They simply do what it takes to bring their lives back into balance.

Resist over-involvement with the media and life dramas. Move forward with detachment whenever possible. Conserve your energy for things that really matter.

Be Part of the Bigger Picture

Animals, even when relaxing, maintain awareness of their surroundings. This is not to say they are always nervous or scared. They simply exist in relationship to the environment and function as part of a dynamic system. Animals are not self-absorbed. They don’t try to control the environment; rather, they work with it. 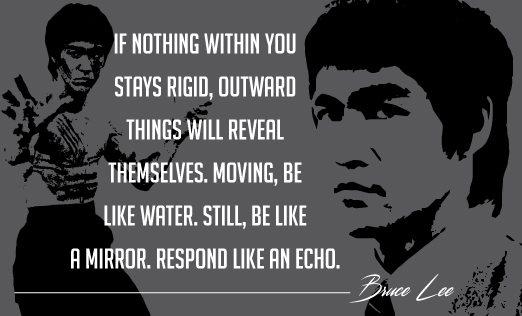 People are often self-absorbed. It’s understandable given the nature of human culture and societies, and the pressures inherent in them. We have separated ourselves with walls, houses, buildings and cities, from the natural world.

Animal behavior teaches us to blend with our environments as part of a bigger picture. To simply get beyond the concerns of self, where the challenges of everyday living press in on us continually, alleviates anxiety. Anxiety keeps us off balance, unprepared for events outside of those daily concerns.

When flowing with the bigger picture, this mysterious existence, and not boxed into a small world of personal concerns, we are better able to deal with any eventuality. In martial arts, the training embeds this concept and awareness extends naturally to include the environment in which one exists. Begin to look out at the horizon every day. Notice the trees, the landscape. When feeling anxiety over personal concerns, walk outside and gaze at the sky for a few moments. In this way, the balance begins to shift away from self-absorbtion toward a more centered mindset.

Animals are on the move every day. They keep their bodies in tiptop shape by doing so. Wild animals don’t get obese; their muscles don’t atrophy. They stay limber and strong throughout their functioning lives.

Human health and well-being are encoded in millennia of accumulated DNA information. Our bodies evolved with certain parameters in place. Circulation, elimination, metabolism, and all the bodily processes either depend upon or are enhanced by movement. We even sleep better after having gotten exercise.

Exercise, where the body functions as a whole, is the most natural way to move, such as walking. But any exercise will get the heart pumping, circulate the blood, awaken bored and deadened nerves, move the bones, and strengthen muscles.

I do not agree that if you can’t exercise at least so many minutes per day, it doesn’t do any good. Everything counts. I do advise moving the body every day, but don’t let an overwhelming task stop you. The most important thing is to just do it.

In addition, don’t sit too long. Get up and move every so often. This not only alleviates pressure on the body from being in one position, cutting off circulation, stiffening the muscles, and more—it resets the brain. Your thinking will be clearer if you get up and move or stretch after 20 minutes of concentrating on a task.

Animals don’t accumulate “things.” As they journey through life they don’t carry baggage. They travel “light,” only taking what they need, not doing more harm than what is necessary to survive.

As humans, there is nothing wrong with having and enjoying “things.” But if we consider the bigger picture, of which it is ideal to be a part of in this life, the accumulation of things may be seen from a different perspective. The animals can show us that we might take what we need while doing the least harm. We can travel “light,” and make a gentle footprint on this world. In this way we blend harmoniously with the ecosystem, and world cultures. Traveling “light” means there are less personal things to be concerned with, so attention may be more available for self-evolution, interaction with existence, and apprehending this life from an experiential viewpoint.

Traveling “light” also applies to actual travel. In martial arts training, I was taught to keep my hands free as a matter of course. If you are walking through a parking lot clutching a purse, or with hands in pockets, it takes longer to respond to an attack. I recommend that all women carry backpack purses for this reason, and also because it is better for the body. A purse over one shoulder throws the body off balance.

One of the first things taught in martial arts is to sink. This is exactly what you see animals do when alerted to danger or an unexpected change in the environment.

Considering most people are absorbed with self-concerns, carrying their concerns with them, not getting enough exercise, and not in touch with the natural world, it is no surprise that being shoved off balance is so easy—both metaphorically and physically. Let’s deal with the physical in this section.

Good posture is important. Maintaining good posture while standing, walking, and sitting enables the body processes to function properly, the chi to move, the blood to circulate, and so one. Slouching not only blocks energy and bodily processes, such as blood movement and nerve messaging, it allows the muscles to atrophy from lack of use.

If you are in a mall and someone walks into you accidentally, will you topple over? Will your purse or briefcase help to unbalance you because your center of gravity is off? Good muscle tone, a balanced stance with evenly distributed weight, and upright spine will serve you well when encountering outside force of any kind.

Assuming then that you are maintaining good posture, the next thing is to learn to sink. In case of an actual attack or physical confrontation, sinking slightly should be your first response. When you sink, even just a little, you will enhance your balance immediately. You will be less likely to be pushed over or lose that balance. Ideally, you want to sink and step out of the attacker’s way simultaneously. Your attacker’s own momentum will work against him or her creating imbalance. Now you have the advantage. You can extricate yourself from the altercation.

The idea is always to avoid fighting, not welcome it. It’s self-defense, not self-offense. To avoid injury is the ultimate goal, which is why learning good self-defense techniques is important—you will be able to protect yourself without causing undue harm. Practice sinking. Just take a step out to the side, and bend your knees slightly. Feel your body align itself after sinking. Become aware of your body mechanics. Extend your awareness beyond mental concerns.

It’s easy to get caught up in the human drama. Step out of the box now and start connecting to a wider perspective, a larger life. Let the animals begin to show you how.